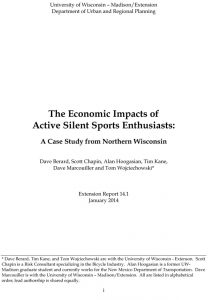 The financial and economic impact of participants in activities commonly known as “silent sports” has long been a significant force in the economies of rural northwest Wisconsin. Hard data and statistical documentation of that impact, however, has been elusive. The Economic Impact of Active Silent Sports Enthusiasts, A Case Study from Northern Wisconsin, a 54-page report provides an in-depth look at the various influences and impacts of these activities. Authored by Dave Berard, Scott Chapin, Alan Hoogasian, Tim Kane, Dave Marcouiller, and Tom Wojciechowski, the study was conducted by the University of Wisconsin – Madison/Extension, Department of Urban and Regional Planning.

“While it’s always been relatively easy to gather total economic expenditure data from an event such as the American Birkebeiner or Chequamegon Fat Tire Festival,” says Scott Chapin, “the total (annualized) economic impact these local events and their associated activities have on the community was harder to find.”

Outdoor recreation and its ties to tourism-demand are key components of the multiple-use landscape of Northern Wisconsin, which is endowed with both abundant natural amenities in its forests, waters, and recreational assets and receptive community retail and service sectors. The purpose of the study was to provide information for use by development and recreation planners, and others in their pursuit to improve the quality and availability of these recreational opportunities.

For the purpose of this study, only selected activities: cross country skiing, biking, and running were researched, due in part to the complexity in gathering data from the many other user-groups. In addition to ascertaining economic impact, the study focuses on silent sports enthusiasts’ relationships to the local communities in which they recreate and presents information related to trip and user characteristics, expenditure patterns, user preferences, and demographic information.

Active silent sports participants were defined as someone who had participated in at least one cross country skiing, biking, or running event during the course of the year-long study. The study area included Ashland, Bayfield, and Sawyer Counties of northern Wisconsin. Research methods involved email surveys to participants in an assortment of events in this area during the 2012 calendar year.  Because of the difficulty in efficiently reaching individual silent sport enthusiasts at the many trailheads and other venues, it was determined that using event registration lists would provide better direct access to survey subjects. It was understood that there are more participants in these activities who visit the area than just those that participate in events. For that reason, the authors acknowledge that their findings and the resulting economic impact may actually be somewhat understated.

Among the key findings of the study, the researchers found that 95 percent of the roughly 26,700 event participants were nonresidents of Ashland, Bayfield and Sawyer Counties. During the 2012 calendar year, an estimated 56,500 individual trips were made to this northern Wisconsin region to participate in silent sports events.

Demographic highlights of survey respondents included: 88 percent had a bachelor’s degree or higher; 50 percent were between the age of 30 and 50; 70% identified their occupation as professional or managerial; and 89 percent reported an annual household income of at least $50,000 with an average household pretax income of $128,000.

On the average, the active silent sports enthusiasts spent about $468 per trip, with about $260 of this taking place locally in the study area.  When annualized, this average annual expenditure pattern suggests trip spending by nonresident visitors of $26.4 million in 2012. Direct spending in the study region was annualized at $14.7 million and when factored for indirect and induced effects, the total economic impact is measured at $16.7 million.

A copy of the complete study can be obtained at http://urpl.wisc.edu/people/marcouiller/publications/ER14.1SilentSportsl.pdf.

Created in 1997 this study looks at the economic impact of the CAMBA mountain bike trails in northwest Wisconsin. It was one of the first studies of its kind to evaluate mountain biking as an economic development tool. 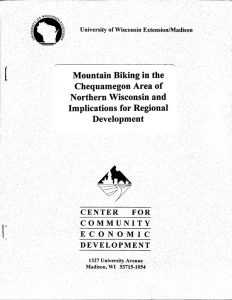